Cutting tools are commonly found with an ultra-thin molecular compound coating applied to its cutting surfaces. These coatings are engineered to combat against forces that wear down your cutting tools and lead to catastrophic tool failure. Not only are coatings created for cutting specific materials, but they also limit heat and friction and enhance the performance of your tool. When selecting a coated tool, the machinist must consider how the material and desired cutting operations may break down the cutting edges of the tool, to determine which coating will best serve their needs. Before those decisions can be made, one must understand how coatings increase a tool’s cutting abilities. The following is an in-depth look into the benefits provided by tool coatings and how they work to improve tool life and performance.

What Is a Coating?

With the proper utilization of these three features, cutting tools can be pushed much harder, run with faster cycle times, and last longer.

1.      Provide a Thermal Barrier Between the Tool and Workpiece

Heat mitigation is essential in machining, as excessive tool and workpiece heating during cutting operations can be detrimental. As the carbide tool’s temperature rapidly increases, its hardness decreases, resulting in greater wear and burn out. Thermal conductivity is a material property used to measure a material’s ability to retain or transfer heat energy. For example, tungsten carbide has a thermal conductivity of 88 W/m.K at 20°C. This means at room temperature, 20°C (68°F), an uncoated carbide tool can conduct 88 Watts of thermal energy per meter with a temperature gradient measured in Kelvin. The materials used in tool coatings do not conduct heat as well with thermal conductivity rates as low as 4.5 W/m.K. This means that a coating with a thermal conductivity of 4.5 W/m.K, the coating would transfer 19.56 times less heat than tungsten carbide.

Figure 1: Thermal gradient of the cutting tip of the uncoated tool [1].

Figure 2: The above images, found in a study titled “Experimental Study and Modeling of Steady State Temperature Distributions in Coated Cemented Carbide Tools in Turning,” written by Amol Thakare and Anders Nordgren, showcase the effects of cutting tool speed and tool deformation on temperature distributions in unworn (left) and worn (right) tool.

Comparing the two tools, it is clear that the coated tool absorbs far less heat than the tool without a coating. With lower thermal conductivity rates, tool coatings create a thermal barrier between the carbide and workpiece. This greatly decreases the internal temperature of the carbide as the heat generated during the cutting operations is redirected into the chips and workpiece. With lower temperatures, faster cutting speeds can be attained. Looking at the thermal gradients above, the uncoated tool running at 155 m/min and the coated tool running at 200 m/min roughly have the same surface temperature. This means the coated tool can run 22.5% faster than its uncoated counterpart.

Another key to limiting heat generation and keeping cutting smooth and chatter-free is to decrease the amount of friction between the cutting tool and workpiece. Frictional force is the resistance to motion, and in the case of cutting tools, the force opposing the lateral and radial movements of the tools as it cuts through the workpiece. This opposing force is determined by the coefficient of friction, often denoted as the Greek letter Mu (μ). The friction coefficient is the ratio between the force required to move one surface across another, divided by the pressure between the two surfaces. Minimizing μ is how coatings decrease the overall frictional forces involved in cutting operations because the force of friction is directly proportional to μ.

Figure 3: The above image, found in “Friction and Wear Characteristics of WC and TiCN-coated Insert in Turning Carbon Steel Workpiece,” displays the friction coefficient of the TiCN coated tool and uncoated tungsten carbide tool.

As seen in figure 3, the TiCN coated tool had a much lower coefficient of friction than the uncoated tool. This lower coefficient decreases the frictional forces experienced during cutting operations, reducing heat generation, giving a better part finish, and extending tool life.

Selecting a coated tool with high lubricity would also be ideal for cutting materials with low melting temperatures, as well as materials that generate a tremendous amount of heat during machining, such as high hardness alloys. In materials with low melting points (such as aluminum or other non-ferrous metals), high friction can cause heat generation and sticking of chips. These chips can then cause chip packing in flute valleys and galling on the cutting edge. This galling is called built up edge (BUE) which creates a thicker edge and can break down the tool. With lower friction coefficients, it is more difficult for chips to stick to the tool and for BUE to occur. When cutting materials that would generate high temperatures (such as stainless steels and aerospace alloys), keeping frictional forces at a minimum, will reduce heat generation, and result in smoother cutting, preserving the tool’s cutting edges.

Adding a coating with a high microhardness rating increases a cutting tool’s ability to resist wear and avoid permanent deformations. In the cutting industry, cutting tool grades for tungsten carbide range from grades C1 to C14, depending on what the cutting operation the tool will be performing. Between grades C1 to C14, tungsten carbide has a Vickers Hardness (HV) ranging from 760 HV to 1740 HV. Tool coatings have higher microhardness ratings than tungsten carbide. Adding a coating can increase a tool’s hardness anywhere from 2213 HV using a TiN coating, to 9993 HV with the CVD diamond coating. While a TiN coating would not be chosen solely for its hardness, it shows that even the coating with the lowest hardness is still harder than bare tungsten carbide. By making the cutting tool significantly harder, the ratio of workpiece hardness to tool hardness increases. Increasing the tool’s hardness will allow it to shear off chips and remove material with greater ease, especially against high abrasive materials, while the tool maintains its structural integrity against the extreme forces experienced during cutting operations.

The benefits of increasing tool hardness with its improved performance are demonstrated in an experiment done by Afyon Kocatepe University. In this experiment, a 2 flute micro end mill with a cutting diameter of 4 mm was slotting into Inconel 718 at 20,000 rpm, with a feed rate of 5 micrometers per flute, a depth of cut of 0.2 mm and a length of cut of 120 mm [3]. This cut was performed using both an uncoated and AlTiN coated (3620 HV hardness) carbide end mill with no coolant. Below are optical comparator images of the two tools showing their wear and deformations.

Figure 4: The image above from “An Experimental Investigation of the Effect of Coating Material on Tool Wear in Micro Milling of Inconel 718 Super Alloy,” showcases an uncoated cutting tool.

Figure 5: The image aboves from “An Experimental Investigation of the Effect of Coating Material on Tool Wear in Micro Milling of Inconel 718 Super Alloy,” showcases the difference a coating can make on a cutting tool. Figure 4 displays an uncoated cutting tool, and figure 5 displays a cutting tool with AlTiN PVD coating.

Looking at the two tools, it is evident that the uncoated tool experienced significant flank and crater wear, which resulted in the flaking of its cutting edges. As this tool performed its cuts, flank wear occurred first. This wear happened directly at the cutting edge as the abrasive Inconel alloy began to breakdown the tool. As the flank wear increased past the cutting edge and into the rake face of the tool, crater wear formed. Crater wear is characterized by its depth into the tool. As chips slid across the rake face and increased this crater, pieces of the carbide tool began to flake off, forming a new, weaker cutting edge. This new edge is blunt and will not be capable for cutting the workpiece properly, and will continue to break apart until catastrophic tool failure occurs.

Flank and crater wear are two types of mechanical tool decay that are a direct result of the abrasiveness of the workpiece material. Increasing the microhardness of the cutting tool can combat against these abrasive modes of tool wear. This is proven in figure 5, as the AlTiN PVD coated end mill held up much better in comparison to the uncoated tool as it experienced minimal flank wear. As the coated tool performed its cuts, the only detectable wear was a microfracture along one of its cutting edges, and peeling of the AlTiN coating. The protection provided by the coating against abrasive wear is evident in this example, and with this protection, tool life is significantly increased.

The Benefit of Tool Coatings During Machining

Combining the three main advantages of a tool coating, thermal resistance, increased lubricity, and higher microhardness, not only does the tool perform better, but it lasts longer. Minimizing thermal and abrasive tool wear can substantially prolong tool life. 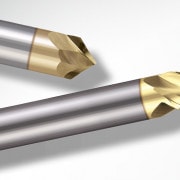 What to Know About Helical Solution’s Zplus Coating 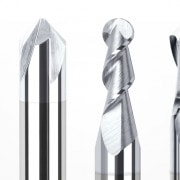 What to Know About Harvey Tool’s TiB2 Coating 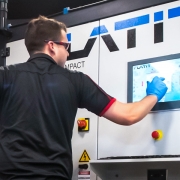 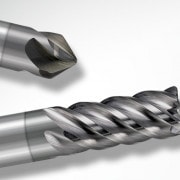