Tool entry is pivotal to machining success, as it’s one of the most punishing operations for a cutter. Entering a part in a way that’s not ideal for the tool or operation could lead to a damaged part or exhausted shop resources. Below, we’ll explore the most common part entry methods, as well as tips for how to perform them successfully.

Pre-drilling a hole to full pocket depth (and 5-10% larger than the end mill diameter) is the safest practice of dropping your end mill into a pocket. This method ensures the least amount of end work abuse and premature tool wear. 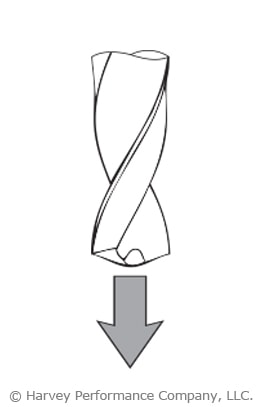 Helical Interpolation is a very common and safe practice of tool entry with ferrous materials. Employing corner radius end mills during this operation will decrease tool wear and lessen corner breakdown. With this method, use a programmed helix diameter of greater than 110-120% of the cutter diameter. 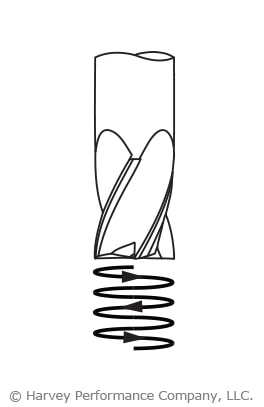 This type of operation can be very successful, but institutes many different torsional forces the cutter must withstand. A strong core is key for this method, as is room for proper chip evacuation. Using tools with a corner radius, which strengthen its cutting portion, will help. 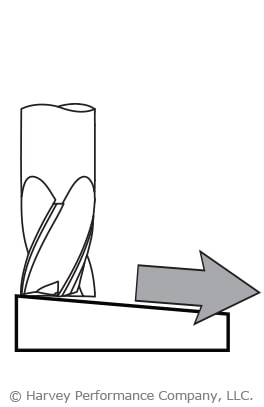 For more information on this popular tool entry method, see Ramping to Success.

This method of tool entry is similar to ramping in both method and benefit. However, while ramping enters the part from the top, arcing does so from the side. The end mill follows a curved tool path, or arc, when milling, this gradually increasing the load on the tool as it enters the part. Additionally, the load put on the tool decreases as it exits the part, helping to avoid shock loading and tool breakage. 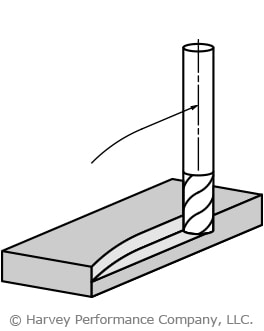 This is a common, yet often problematic method of entering a part. A straight plunge into a part can easily lead to tool breakage. If opting for this machining method, however, certain criteria must be met for best chances of machining success. The tool must be center cutting, as end milling incorporates a flat entry point making chip evacuation extremely difficult. Drill bits are intended for straight plunging, however, and should be used for this type of operation. 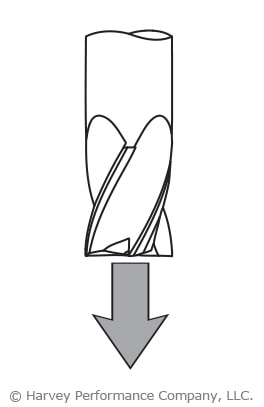 Straight entry into the part takes a toll on the cutter, as does a straight plunge. Until the cutter is fully engaged, the feed rate upon entry is recommended to be reduced by at least 50% during this operation. 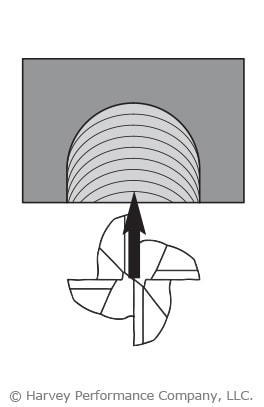 Rolling into the cut ensures a cutter to work its way to full engagement and naturally acquire proper chip thickness. The feed rate in this scenario should be reduced by 50%. 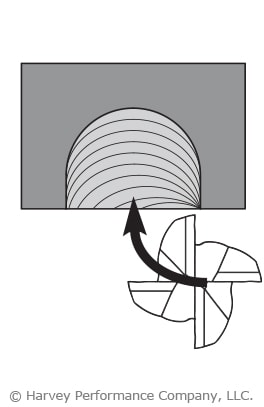 Poor tool life and premature tool failure are concerns in every machining application. Something as simple as tool path selection – and how a tool first enters a part – can make all the difference. Tool entry has a great deal of influence on its overall success, as it’s one of the most punishing operations for a cutter. Ramping into a part, via a circular or linear toolpath, is one of the most popular and oftentimes the most successful methods (Figure 1). Below, learn what ramping is, its benefits, and in which situations it can be used.

Ramping refers to simultaneous radial and axial motion of a cutting tool, making an angular tool path. Oftentimes, this method is used to approach a part when there is a need to create closed forms such as pockets, cavities, engravings, and holes. In doing so, the need to plunge with an end mill or drill to create a starting point is eliminated. Ramping is particularly important in micromachining where even the slightest imbalance in cutting forces can cause tool failure.

There are two types of ramping toolpaths: Linear and Circular (Figure 2 ). 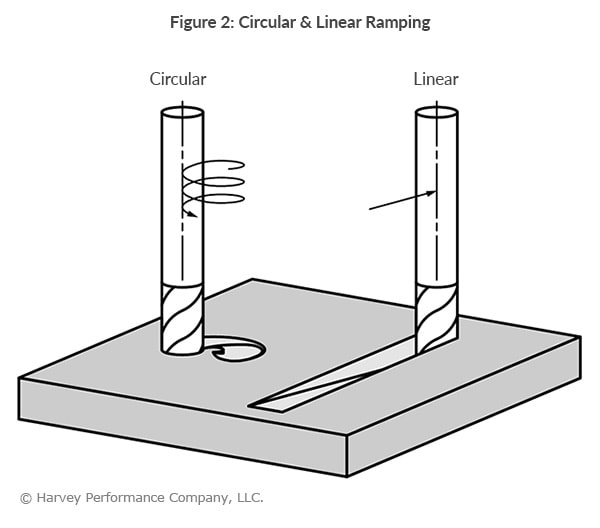 Linear Ramping involves moving a cutting tool along two axes (the z-axis and one of the x, y axes). This method has significant more radial engagement with complementary increased cutting forces distributed across only two axes.

Circular Ramping (Helical Interpolation) has a spiral motion of the cutting tool that engages all three axes (x, y, and z axes). This method typically has less radial engagement on the cutting tool, with the cutting forces distributed across the three different axes. This is the recommended method, as it ensures the longest tool life.

When a tool enters the part via a Ramping method, it gradually increases in depth, preventing any shock loading on end mills. This reduces costs resulting from unnecessary tool breakage. Ramping produces smaller chips when compared to plunging, which makes chip evacuation faster and easier. As a result, cycle time can be decreased by running the end mill at faster parameters. Ramping also creates an extra space in the tool changer that would otherwise be occupied by a drill purposed with machining a starter hole.

Similar to ramping in both method and benefit, arcing is another technique of approaching a workpiece (See Figure 3). Milling part features with thin wall characteristics, while also maintaining dimensional accuracy and straightness, can be difficult at best. Although multiple factors contribute, some key components are discussed below and can help to increase your thin wall milling accuracy.

Long length tooling with a long length of cut can spell trouble in thin wall milling situations due to deflection, chatter and breakage. It is essential to keep your tool as strong as possible while maintaining the ability to reach to the desired depth. Necked-down tooling provides added tool strength while also helping you to reach greater than 3x Diameter depths.

To support the thin wall during the machining process, keep a wide-cross section behind it. We recommend utilizing a “stepped down” approach, which divides the total wall height to manageable depths while working each side of the wall. The Axial Depth of Cut (ADOC) dimension will vary depending on the material (and its hardness) being cut.

A progressive Radial Depth Of Cut (RDOC) strategy is also important as the thin wall height is increasing. Reducing tool pressure while support stock is disappearing is equally important to keep the thin wall stable. 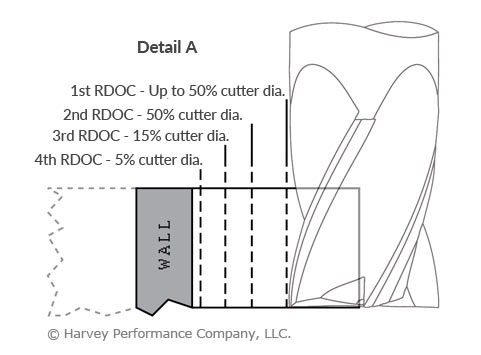